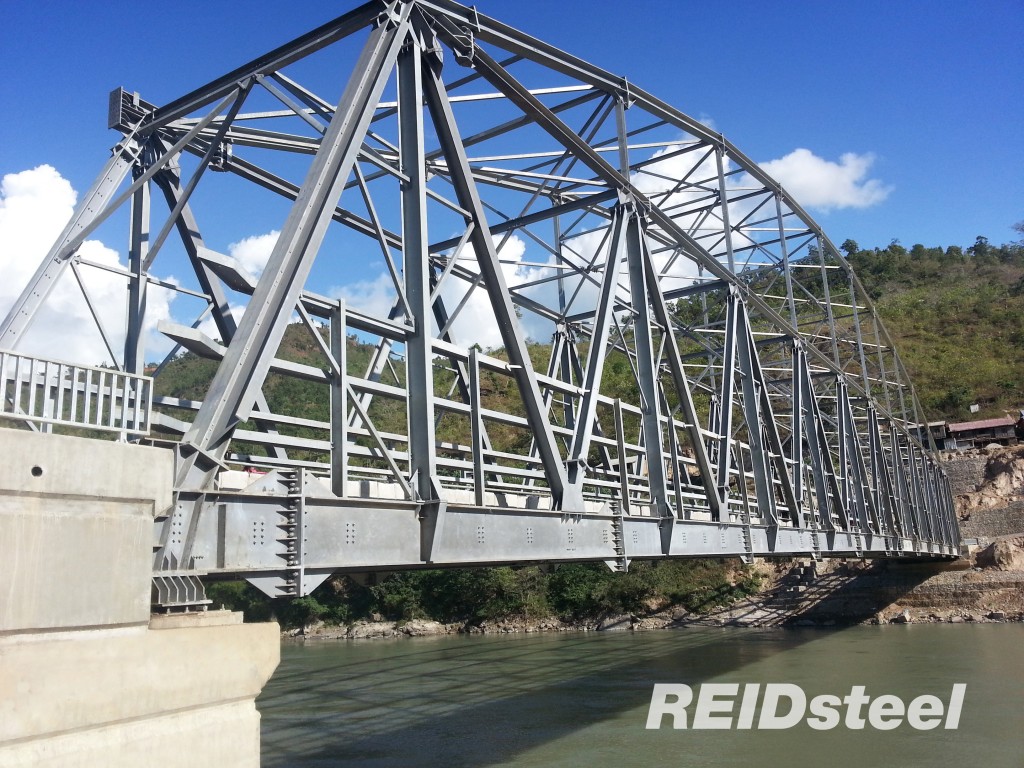 Home to the highest point on earth, Mount Everest and the birthplace of Gautam Buddha, Nepal is an ancient and beautiful country.

Today, its people are looking to the future – The UK is helping by providing aid from the Department for International Development (DFID) and working with IMC Worldwide to support the Nepalese people in gaining reliable infrastructure.

The work is coordinated by Tim Stiff, of ICMW, acting as Team Leader for the Rural Access Programme, RAP2, and reporting back to the British government.

The only way for the country to advance and eliminate rural poverty is to build roads and bridges. Nepal’s total road network and density are low and only 43% of the population has access to all-weather roads.

As part of the Worldbank’s Road Sector Development Project (RSDP), REIDsteel had been asked to design, manufacture and erect three bridges; the Piluwah Khola, Sabu Khola and Arun Khola. In Nepali, ‘Khola’ means stream, which does not quite translate as the smallest of these bridges was 96m long! 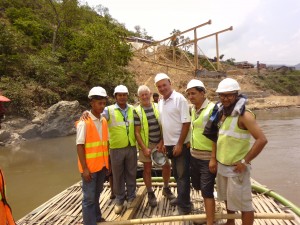 The first two bridges were completed earlier this year and we are pleased to announce that the Arun Khola Bridge opened for traffic just a few days ago.

Situated in the Arun valley at Leguwaghat, Dhankuta, the Arun Bridge is a single 120m-span Road Bridge. It is constructed from paraboloid trusses complete with 6m wide carriageway and a 1m raised footpath on one side. The structure was hot dip galvanised for long life and low maintenance.

The average timespan for a bridge to be built in Nepal is five years. Kathmandu-based company, Kalika spent just ten months erecting from beginning to end; or rather, from both ends to the middle.

This speed was partly due to a lot of pre-planning and the provision of equipment designed and manufactured by REIDsteel to allow construction over a fast flowing river with no access into the river bed; and with a steep cliff approach at one end and a flat floodplain the other side.

It was inevitable that there would be difficulty transporting construction materials and tools to the site. To overcome this, REIDsteel’s shipped the bow-string bridge as unassembled metal members and crates of small parts and accessories which fit precisely into 20ft and 40ft containers. These were unloaded then taken in agricultural trailers along the narrow and muddy tracks of Nepal.

The bridge is built on well foundations 16m deep on both sides of the river and is designed to last 100 years, being earthquake and flood resistant. This is achieved by the inclusion of expansion/shrinkage joints at either end to allow thermal and seismic movement, and the central bracket’s web is torsionally flexible and ductile enough to allow the connecting struts to move with the thermal movements of the bridge. 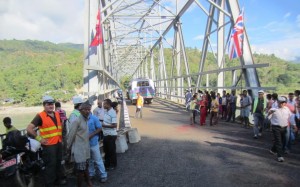 Upon the Arun Bridge’s opening, REIDsteel were delighted to see it busy with vehicles and local people.
It is pleasing to know that our bridge has created new access for people to enact businesses, go to schools, connect with friends and family and be able to make contact with resources leading to better opportunities.
Engineering is the use of materials and techniques to improve the lot of the human race; exemplified by this sort of work.

Designed by Peter Mrozinski and drawn by Kevin Williams.

Comments Off on REIDsteel in Nepal

Slow growth in Nepal’s exports and difficulty moving home-grown agricultural products around the country to reduce dependence on imports are getting a boost from steel bridges that are designed and built in the UK.

Helped by £3 million of funding from the British government, through the Department for International Development’s (DFID) Rural Access Programme (RAP), REIDsteel of Christchurch, Dorset was appointed by local contractor Kalika of Khatmandu to construct a 120m steel span bridge to open up access between Khandbari and Chainpur and boost trade across the Sabha Khola river.

The bridge links Sankhuwasabha with the national road network and has the potential to transform the lives of 800,000 people – The river runs through the Arun Valley, one of the deepest in the world at 300-435 metres.

Without a bridge the people of the region faced extreme difficulties crossing from one side to the other. During the monsoon season boats would regularly capsize, putting lives and cargo in peril.

Building a bridge in such a remote region is easier said than done. Road access was little more than mud tracks in places and the mountainous terrain meant getting steel girders from the port to the site was a logistical nightmare.

However, REIDsteel has almost 100 years’ experience of building bridges around the world and the company completed a similar, slightly smaller 96 metre bridge in the region in 2011.

This meant the team was able to design, manufacture, ship and construct the bridge within just one year, far quicker than the contractor had expected.
Rollo Reid, REIDsteel’s technical director says:

The speed of construction was down to the hard work and dedication of the team of local workers. Supervisors sent by us from the UK trained the team and oversaw the work but the hard manual work was done by the Nepalise builders working on the project.

Hard manual labour is exactly what it takes to build bridges in Nepal. When REIDsteel built the Piluwa Kohla bridge, north of Dharan in Nepal, no cranes were available so towers were made using disused electricity transmission steel poles and two aerial ropeways spanning the river were put in place.

Using ropes and hand-power, the sections of the bridge were put into position. Although this work was done during the dry season, the project suffered a set-back when a flood surged down the river, sweeping several of the girders and pole props into the water.

Luckily, once the flood water had abated, the bridge parts could be salvaged and work was able to resume.

The satisfaction of getting through the build stages and seeing the finished bridges is immense.

The structures provide the only bit of straight, flat road for miles around and it’s incredibly rewarding to see the sheer joy on the faces of locals who no longer have to dice with death to cross the valley.

Knowing that something that was designed, crafted and shipped from a small town in England will have a major impact on helping trade flourish in such a remote part of the world makes all of us at Reid’s extremely proud. 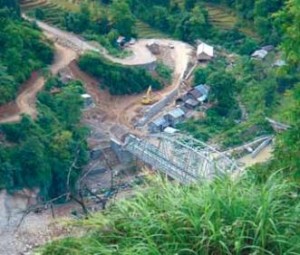 As taken from the Royal Engineer’s Journal, this articles discusses the contstruction of a bridge in Nepal.  Click to read the article Bridging in Nepal.

Comments Off on Bridging in Nepal