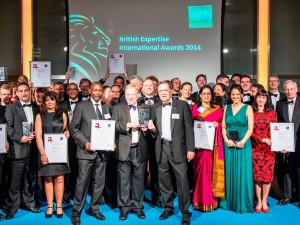 Components of the DFID-funded Rural Access Programme (RAP) in Nepal have been shortlisted for three major awards from British Expertise in recognition of the programme’s wide-reaching and sustainable impact on the lives of some of the world’s poorest people. Meanwhile, the consulting firm behind the programme’s design and implementation, IMC Worldwide, has itself been nominated in the category of Outstanding International Business (SME) for its work on RAP and other DFID-funded development programmes.

The UK has supported the development and construction of two bridges linking thousands of isolated communities in Eastern Nepal under the successful decade long Rural Access Programme. In July 2008, the GoN approached DFID for funding for the construction of the two bridges.

The overall RAP Bridge Component cost for both bridges and the Technical Assistance Consultancy for the project management and construction supervision by UK Consultant IMC Worldwide is approximately £5.9m (approximate because the of the exchange rate as the construction contract is priced in local currency). 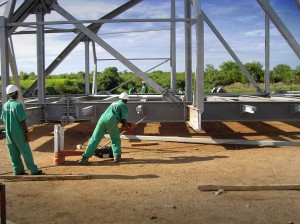 The project involved the construction of two bridges one over the Sabha Khola River near a small town of Tumlingtar and the second over the larger Arun River at Leguwa. The Sabha Khola bridge provides an all-weather crossing of the seasonal river that was previously only fordable by four-wheel drive vehicles, motorcycles and pedestrians for approximately six months of the year.

The second bridge over the Arun river is considered the more important bridge as it provides an all season access for 203,000 people, approximately 280 kms of roads built under the various phases of the UK funded Rural Access Programme and enables the local people to be more able in conjunction with other UK funded projects in the district to lift themselves out of poverty and reduce their reliance on aid in both the immediate district and other six other districts directly served by the new crossing. 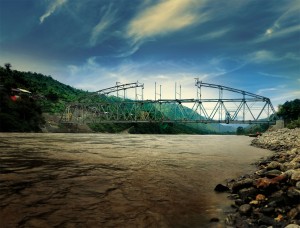 By comparison the total population in the Khadbari and Kharang districts directly affected, i.e within 5 kilometres of the Sabha Khola bridge site is currently only 3,300people. The bridge is however essential to the District as it provides all weather access to the Arun 3 hydroelectric project site, which means that by aiding infrastructure for the hydroelectric plant Nepal will be better able to address its current capacity shortfall in electric power generation and the District administration headquarters at Khadbari.

The bridge will also enable disaster relief agencies to cross the Sabha Khola River at all times of the year in the event of earthquakes or other disasters in the district.

There are little or no industries in the area apart from shop keeping, tailoring, vegetable farming and other small service business ventures. The main benefits of the bridges will be helping to secure food sufficiency through trade.

The agriculture income is generated from small scale seasonal farming of maize, groundnuts, bananas, mangos, pineapples oranges and rearing and selling of livestock. Locals will also have better access to services, such as health care.

The bridges project is being managed by the Redhill based UK Consultant IMC Worldwide under the broader Rural Access Programme, RAP2, and the consultant was  responsible for the conceptual design and layout and construction supervision of the bridges.

The foundations and abutments of the bridges have been designed to international standards in Nepal.

The two 120m bridges are currently the longest single span steel truss bridges in Nepal and were designed and fabricated in the UK by a well-respected UK firm Reid Steel based in Christchurch Dorset, to withstand earthquakes and flash floods.

Local residents, especially the more disadvantaged women, were hired where possible, and made a valuable contribution to the project by their involvement in mixing the large volumes of concrete required for the foundations, abutments and deck slab and construction of the gabion retaining walls and river protection works. 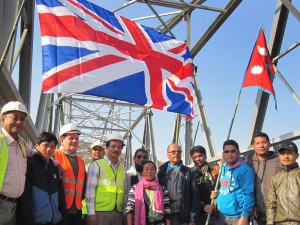 The Sabha Khola Bridge near Tumlingtar bridge was opened to traffic on 22nd January 2013 after taking 12 months to construct from start of foundations to the completion of the erection of the main truss and is an example of a successful transfer of technical, skills between the UK Technical Assistance Consultant and the Nepalese Contractors.

The Sabha Khola Bridge was formally inaugurated the Honourable Vidyadhav Mallik Minister for Federal Affairs and Local Development and the Rt. Hon. Alan Duncan MP, Secretary of State for International Development on 29thApril 2013. Who is rpeorted to have said he was, “overjoyed that his favourite ‘Iron Lady’ Bridge (Sabha Khola) had received an award”.

The Arun Bridge at Leguwa was opened to traffic in October 2013. The official inauguration of the Arun Bridge took place in January 2014 with by the Nepal Chairman of the Council of Ministers with the and British High Commissioner and DFID Head of Nepal Office also in attendance.

International Development Secretary, Justine Greening, said: “These bridges designed and fabricated in Christchurch are a fantastic example of British business and British support making a real difference to some of thousands of very poor people in Eastern Nepal.

“It is a life-line that will allow communities to work and trade, send their children to school, and be better able to access vital services like health care without relying on aid.”

The Sabha Khola and Arun River bridge component has been specifically singled out in the category of Outstanding International Development Project for its role in helping hundreds of thousands of people lift themselves out of poverty and reduce their reliance on aid. The bridges have been described as “a lifeline” by Minister of State for International Development Alan Duncan, giving isolated communities in Eastern Nepal access to much-needed goods and services for the first time.

Comments Off on REIDsteel Success at British Expertise Awards