A Christmas Treat in Spring

Posted on April 25, 2014 | Comments Off on A Christmas Treat in Spring 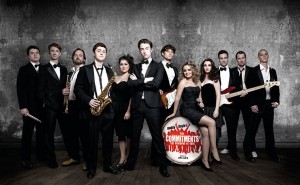